the REFRACTIONS VHS is almost sold out. all orders made before today have shipped. thanks so much for your support.

for now, here are two new items for the distro.

'With a beard like a flying carpet this American aural traveler is known far and wide. Besides numerous recordings under his own name and with Antique Brothers, there are slabs of Robedoor/Pocahaunted goodness with his drumming, appearances in L.A. Vampires and Warm Climate, killer DJ sets as 1/2 of Where's Yr Child team... My god there are always a few more names to drop! L.A.'s one and only, MGG presents a couple of gently floating electronic pieces here: shooting deep, reaching even further. Thoughtful reflections on humanity's high hopes. Melancholic futuristic synthesizers slice the air thin. New age is coming. L.A., rebirth now! Stencil-painted textured J-cards, all signed and numbered by hand, spray-painted cassettes. Edition of 100.' 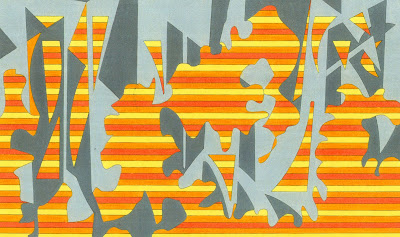 'Let it spill through you like the peak experience of your choice. In your hands is ‘The Empty Space’ and pouring into your head is Stunned’s most trusted synthesizer medicine man M. Geddes Gengras. This is an album dealing with freefall, the ground suddenly dropping out, the fierce void we rush against that resists our naturally preferred trajectory. The cycles and patterns appear to dominate — yet MGG boldly transcends such conditions with his fearless navigation through an unpredictable modular synth patchwork, taking a plunge into analogue novelty in its most naked state. Roots run deep in a tree bearing aural fruits this sweet. Special edition of 222 pro-dubbed & imprinted c93 tapes with double-sided color jcard.'

"Tireless synthesizer explorer M. Geddes Gengras offers his possible tour-de-force on his ultimate tape released by Stunned Records (a label that will be truly missed and very hard to replace in terms of sound and packaging quality). Despite naming his previous Stunned tape This Could Be the Last Time, Gengras proves that he still he has amassed quite a collection of ideas over the course of a few months and is ready to strike (or at least continue to strike) with The Empty Space.
One thing you gotta know about this tape: it is MASSIVE. Not in terms of physical size, or the packaging: in fact, the cassette itself is fairly unremarkable and the insert does not contain any information on the dates of recording, the tracklist or so. Everything that should be known is printed on the cassette. The Empty Space is massive in terms of sheer length: it contains 93 minutes of music. That means each side is a bit over 45 minutes long. Which is even more impressive considering it was all probably recorded in one take during a live performance in June 2011 (if the dedication “for those who were there” might be any indication). I’m a sucker for live electronics and people who manage to create intricate and multilayered structures in real time are pretty much my heroes.
The Empty Space sees Ged Gengras in a more experimental, harsher light, especially in comparison to his previous releases, like the stellar ambient float of Magical Writing (released on his own Peccant Tapes). The sparse, cold sound of the cassette might take quite a few takes to get into, but once it clicks, a world of new possibilities opens. The beginning of side A is deceptive – it makes one think it will be a massive drone jam, while it clearly isn’t – after some 8 minutes, it dissolves into a series of variously pitched extraterrestrial glitches and chirps. One might say, “how isn’t 8 minutes of drone a massive jam?”. Well, remember that each side is over 45 minutes long, so eight minutes is pretty much just a tiny fraction. Having 90 minutes, Ged Gengras has a lot of time to expand his ideas slowly and carefully – people used to standard c30’s might get annoyed by the seemingly monotonous sound which changes very slowly. But that’s the trick – Gengras gives the listener time to immerse into each “movement” and “choose” their personal favorite. The slow, somewhat “shy” sequences are separated by echoed, glitchy escapades into separate worlds of synth pad wizardry and abrasive, noisy textures.
While the side A was dominated almost entirely by the Glitch, side B is the domain of the Sequence. It begins with a bubbling glitchy madness that is paradoxical in the fact that it’s at the same time cold and cozy. 12 minutes later and a faster pattern kicks in, existing in a “virgin”, clear state for a short time, but soon getting attacked by the spores, which in turn deform and skew the sequence, gradually smothering it and reducing it to occasional distant bleeps. The whole process of deconstruction and replacing the crystal clear, needle-like sounds with mangled, abrasive textures is like the destruction of the polished, meditative gems of the Berlin school by the British industrial/noise iconoclasts like Whitehouse. The Teutonic sequence then gets up and fights with the warbling synth noise again – the second part of side B becomes a battlefield between the melodic and the chaotic; where brutal glitches and blasts of white noise clash with cosmic echoes and rhythmical kraut-isms. The end of the tape is a sort of consensus with cut-up sounds forming a rudimentary, skewed, yet strangely enjoyable melody in the style of Caboladies’ Renewable Destination.
M. Geddes Gengras’ The Empty Space is an interesting insight into the creative process, the ability to improvise during live performance and a document of Ged’s amazing work in the field of synthesizers and electronic music. It might also be an indicator of the “tape scene’s” directions for the future, where the marriage of 70’s and 80’s prog electronics and 90’s and 00’s glitch is inevitable." - WEED TEMPLE